Fran Manen and the “Miniboss” have returned to the program “La Tarde, aquí y ahora” of Canal Sur presented by the famous Juan y Medio and Eva Ruiz.

Juan y Medio, a great fan of motorcycles, was once again in awe of the two motorcycles that Fran brought to the set: the BMW R100 Springer “Survivor” and the Harley Springer Bobber Blue.

Accompanied by his son (the “mini-boss”) Fran explained the latest news and future initiatives that Lord Drake Kustoms is preparing for the future. 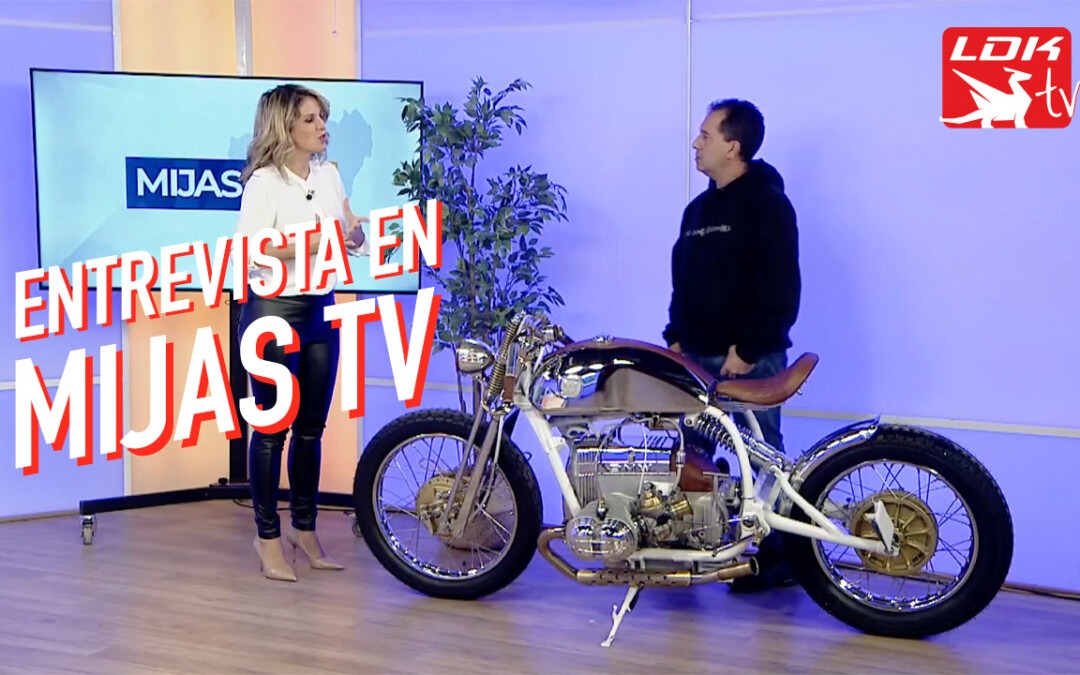 MIJAS TV interviews Fran Manen and presents the bike that will go to the next championship.

Francisco Alí Manén has been invited today January 10, 2023 in the television program MIJAS TV for an interview.

There, Francisco took the opportunity to show for the first time the bike he will present in the next Custom World Championship, in which he still holds the second position today.

It is not the first time that this local television invites Lord Drake Kustoms to participate in their broadcasts, always showing a great interest in the work that Fran Manen and his team do in the province of Malaga. 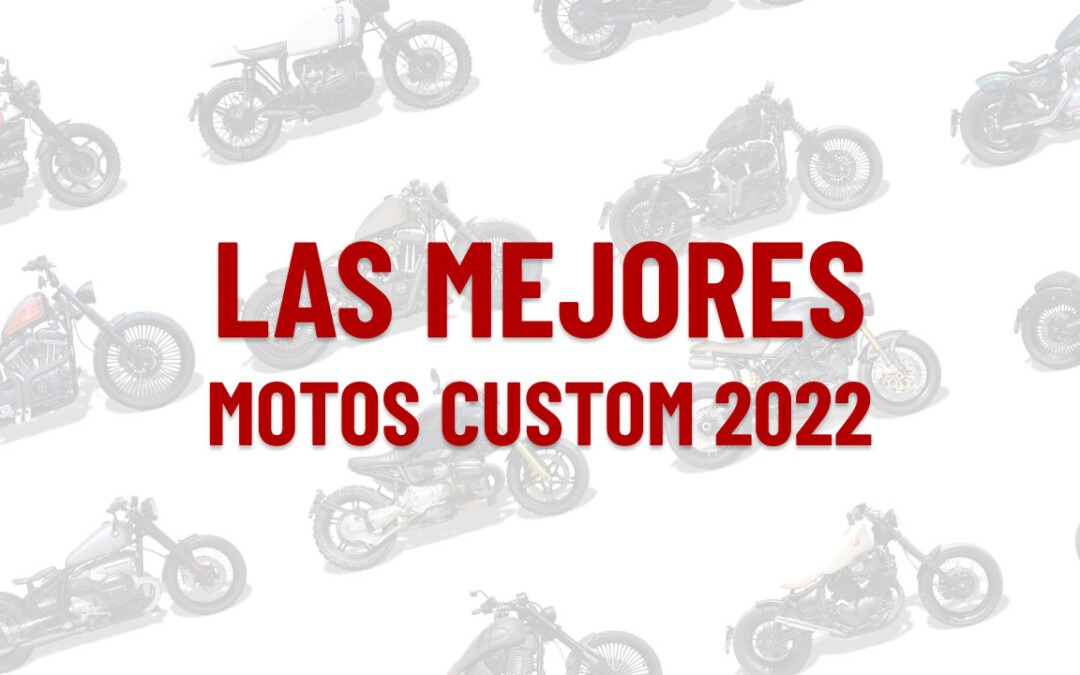 In the world of custom motorcycles, Lord Drake Kustoms is a brand that has always stood out for its unique style and attention to detail. In 2022 our company has released some seriously impressive bikes that we are excited to share with you all.

So, once the year is over, we are going to review the 21 best custom motorcycles that LDK has manufactured throughout all of this 2022.

First on our list is the Sportster Bobber Army. This has been one of the bikes that our fans liked the most this year. It is a motorcycle that came directly from a Harley dealer to our customization workshop. The base model was a 2021 Sportster 48 Forty Eight and we have turned it into a nice Bobber with a “retro” feel, in the style of the old military Harleys used in the war.

This DUCATI S4R “NEORACER” is not the first motorcycle of the Italian brand that Lord Drake Kustoms has customized in his motorcycle transformation workshop in Spain, although it is one of the most striking modification jobs on a Ducati motorcycle that he has done so far.

This BMW R18 “BOBBER STEEL” has been the first R18 that we have modified but not the last because we have already worked on customizing two other motorcycles of the same model from the German brand.

This Yamaha Scrambler is the third XT 600 that Lord Drake Kustoms has recently transformed in Spain and this time they have achieved an authentic scrambler motorcycle with a mythical base with the Yamaha XT 600 from the late 90s.

The used base used for this 330 VROD was a 2014 Harley Davidson Nightrod Special.

This Sportster Bobber has been carefully modified from start to finish. A shorter handcrafted front fender, bobber rear fender for Harley Sportster fitted to the wheel with highly detailed handcrafted brackets have been installed.

BMW “BABYBLUE” is the name we have given to this mix of BMW cafe racer and scrambler customized. The motorcycle transformed in this case has been a BMW R100 that mixes components from very different custom motorcycle styles, such as the cafe racer and the scrambler.

The base transformed motorcycle has been a Sportster Iron 883. As for the style of customization of a bike like this, basically we can say that it is a cafe racer motorcycle modified on a Harley Sportster.

Lord Drake Kustoms received this BMW R18 from its owner, to be a completely modified motorcycle. But with one condition; and it is that it had to maintain the original black color, with white lines and chrome components.

This custom motorcyclecame to us from the North of Spain and its owner wanted an authentic Harley Davidson bobber, but with more spectacular looking and size rims… and above all he wanted to keep the colors and graphics of the original Sportster penaut gas tank. The base model is a 2002 Harley Davidson Sportster that we have done a real Bobber bike modification job on.

The BMW SURVIVOR broke the mold when it was presented to the public and proof of this is that several units of the limited edition have already been sold in just 8 months. But we realized that the motorcycle is very successful but it is a cafe racer motorcycle for a very small audience due to its exclusivity and high cost; It is also a custom bike more for a museum than to ride with it. For this reason, we decided to release a cheaper version and, above all, more versatile and for the street… that’s where the new BMW R SPORT EDITION was born.

Lord Drake Kustoms received this previously customized Sportster 1200 in an artisanal and very precarious way from a Madrid client. Its owner wanted to keep the original rims and engine chrome and also wanted the bike to be green. The rest was basically left to Lord Drake Kustoms.

This BMW K100 “M SCRAMBLER” has been dressed in the colors of the “M” edition of the cars of the German brand. Its owner wanted it to be a scrambler-style motorcycle but as low as possible, with country tires and above all the seat had to be red and the fuel tank in the colors of BMW M.

For this VROD Black Widow , a Harley Vrod Street has been used as a base,a custom model of the American brand that is somewhat different from the rest of the first Vrods and that was also characterized by being taller and having intermediate foot controls and by having a nice inverted hairpin.

Lord Drake Kustoms was commissioned by a client who already had this 2011 Harley Fat Boy and who wanted to give it a touch of an exclusive and transformed motorcycle but with a very important premise… it had to keep the two seats and be as comfortable as possible for the rider. passenger.

Lord Drake Kustoms does not usually say “NO” and this time we have shown it with the customization of this Victory Hammer 8 Ball that his client was about to sell because he thought that it could not be modified or transformed into something more attractive.

This Sportster bobber has been customized on a 2007 Harley Davidson Sportster Low that had been in an accident. Its owner wanted to take advantage of the opportunity to repair the damage and keep it original; turn it into a single-seater bobber bike.

The exact model that we have used for this bobber style motorcycle modification has been the new Harley Softail Standard of the year 2020. A powerful beast from the American motorcycle brand with a Milwaukee-Eight engine and a displacement of 1750 cc… in addition to the new chassis with a damping system different from that of the classic softail models.

On this occasion, we have achieved a brutal, strong and tough looking BMW Scrambler. All this, despite the fact that the R1150R models and their little sister the R850R, are perhaps somewhat complicated motorcycles to use as a basis for a good motorcycle transformation, (due to their fuel tank and front suspension system).

This Virago Ave Fenix has undergone a radical customization to become a beautiful bobber bike that has risen from the ashes in the cafe racer workshop of Lord Drake Kustoms in Spain. 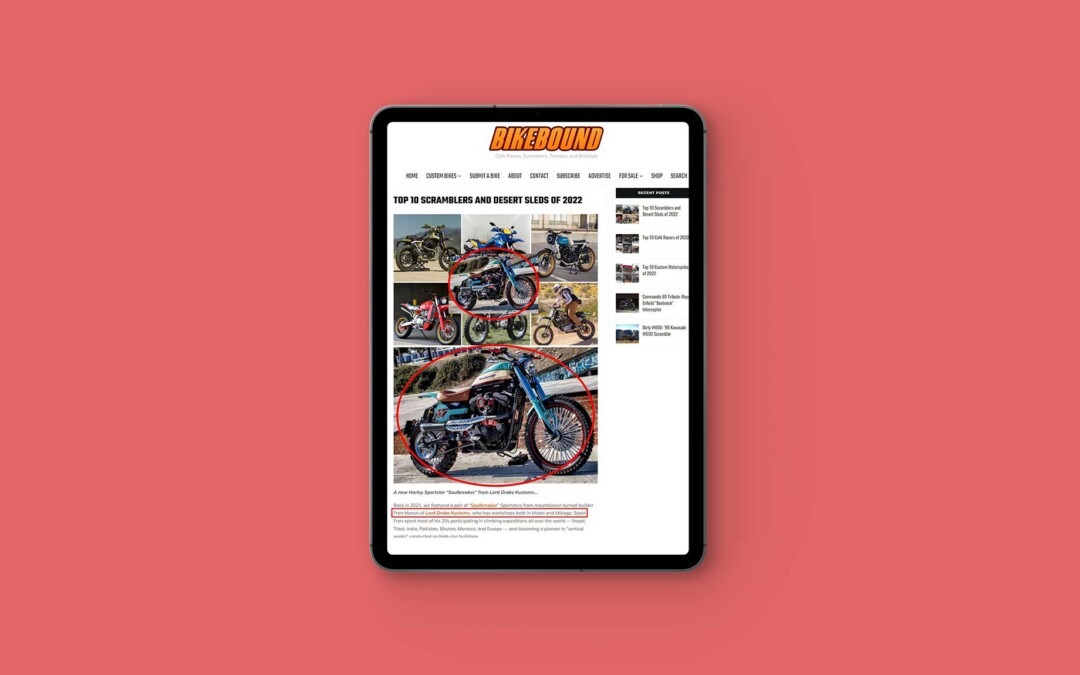 Bultracker 47 is the bike that has put Lord Drake Kustoms back in the TOP 10 worldwide.

This prestigious American magazine is a reference in the custom world.

This is not the first time Lord Drake Kustom gets this merit, already in 2021 he was also on this list with his Yamaha XT Scrambler motorcycle.

You can read the full BIKEBOUND report here:

Canal Sur, the Andalusian television program “Los Repobladores” has made an in-depth report on Fran Manen. This program seeks Andalusians who have returned to their homeland to continue developing their activity or a new one. These are people who have succeeded in other parts of the world and decided to return to their roots.

This is the case of Fran, who after a stay in Miami (USA) and gaining international fame, decided to return to his hometown (Velez-Malaga) to continue customizing motorcycles for Europe and the East in general.

The report covers Fran’s life and also shows the people close to him in his life, such as his family, his workers and his friends, as they travel through picturesque places in his region.

The program aired on January 1, 2023 and can be viewed below. 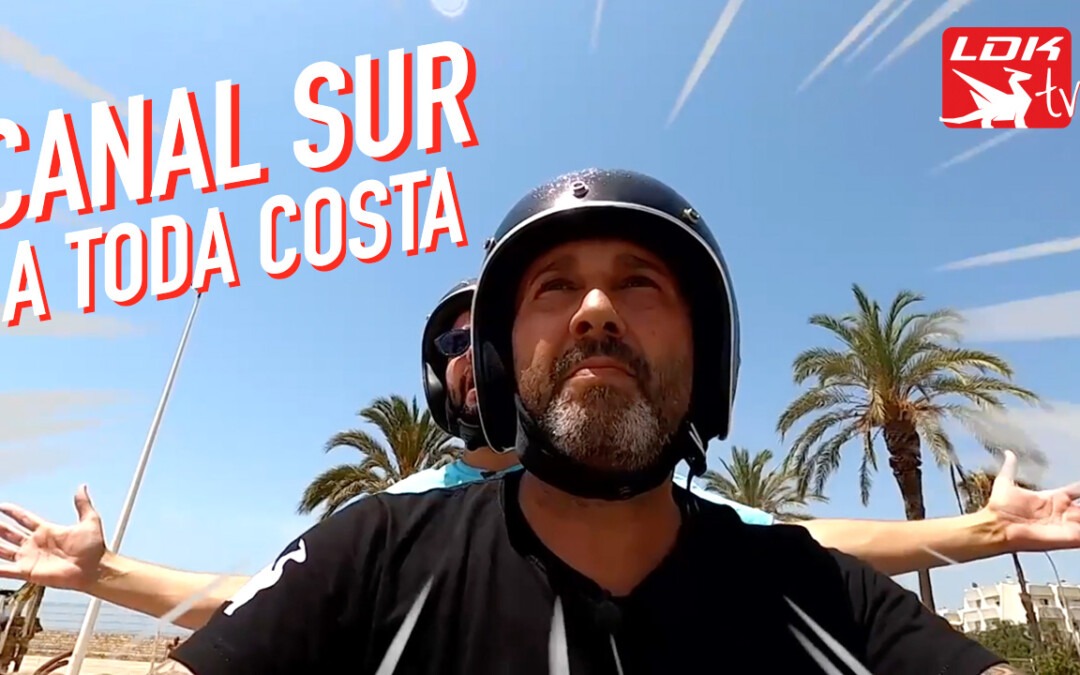 The team of “A toda costa”, a summer program on Canal Sur that travels through the most charming places in Andalusia, getting to know its people, went to the beach of Torre del Mar (Vélez-Málaga) to interview and meet Fran Manen.

Fran brought two of his latest creations to the beach, which the presenter was able to admire up close. These are theBMW R Springer “Survivor” and the Harley Davidson Springer Bobber Blue. They also went on a short motorcycle trip together.