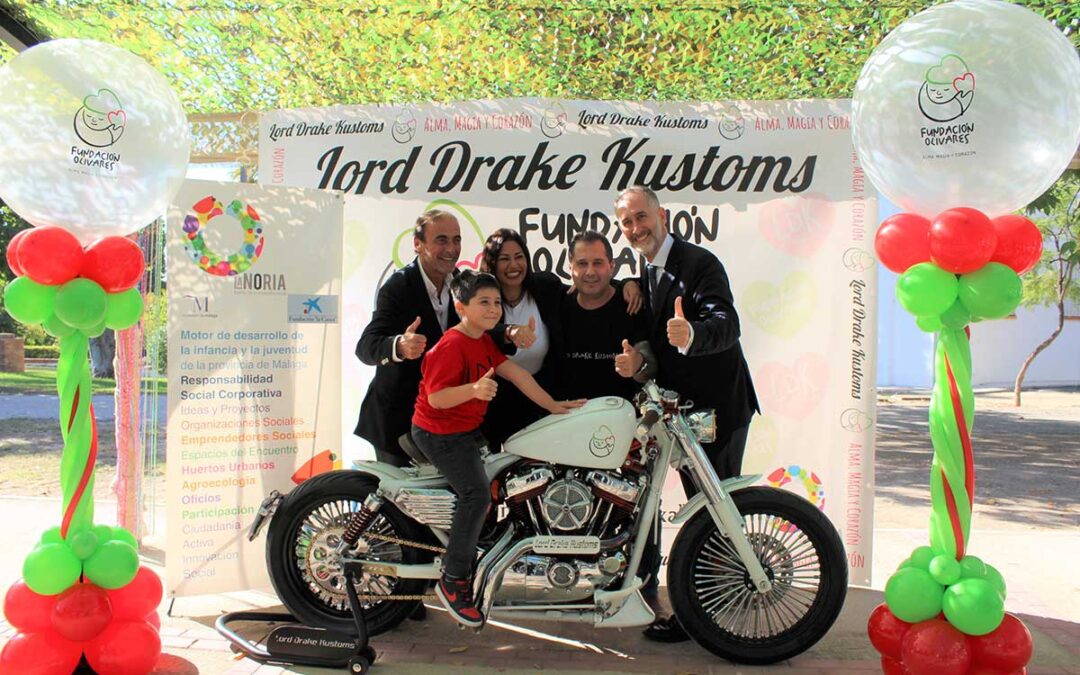 This morning, Francisco Alí Manén (owner of Lord Drake Kustoms) presented a fully customized Harley Davidson for the Olivares Foundation and its new campaign “SOBRE RUEDAS”. This custom bike it will be raffled to raise funds so that the foundation can continue helping children with cancer and other chronic diseases.

This motorcycle customizedby Lord Drake Kustoms is a Harley Davidson, Sportster 1200model that has been transformed over several months to become a unique and exclusive motorcycle with a lot of Soul, Magic and Heart.

The presentation ceremony was held in the gardens of the La Noria building (Next to the Maternal and Child Hospital of Malaga), where the Foundation has its headquarters and, of course, there were members of the foundation, volunteers and friends who accompanied the event.Andrés Olivares (president of Fundación Olivares) and Francisco Alí Manén (owner of Lord Drake Kustoms company dedicated to customizing motorcycles worldwide)

According to the president of the Olivares Foundation, Andrés Olivares, the ambitious economic goal of this Malaga entity is € 200,000 for which they will have to sell 20,000 tickets online at € 10 each. Ballots can be purchased through the following link https://www.kukumiku.com/sorteos/harley-davidson-custom/

The campaign receives the support of Fundación La Caixa, in the event represented by the director of institutions, Joaquín Ramírezand the Malaga Provincial Council. The digital marketing strategy to meet the objective of the campaign has been designed by the Malaga company WindUp. As always, the Malaga City Council has also shown its support for this solidarity campaign, and has been represented in the presentation by Laura Robles, the City Council’s social rights advisor.

The entire proceeds obtained from the sale of the virtual ballots will be used to fulfill the social objective of the Olivares Foundation, which several years ago opened its services to complex chronic pediatric patients and which intends to triple the number of families served in the next three years.

This is not the first motorcycle that Francisco made for a charitable cause, but it is the first one he makes in his native land, Malaga … The previous ones have been made in Miami where he has his headquarters and where he has customized and donated motorcycles for the Antonio Banderas charity gala in Miami where they raise funds for the children’s hospital“Nicklaus Children’s Hospital” and the “Fundación Lágrimas y Favores” … or also for the Festivals Of Speed event where they raise funds to help children’s hospitals such as the “Arnold Palmer Hospital ”(Orlando). 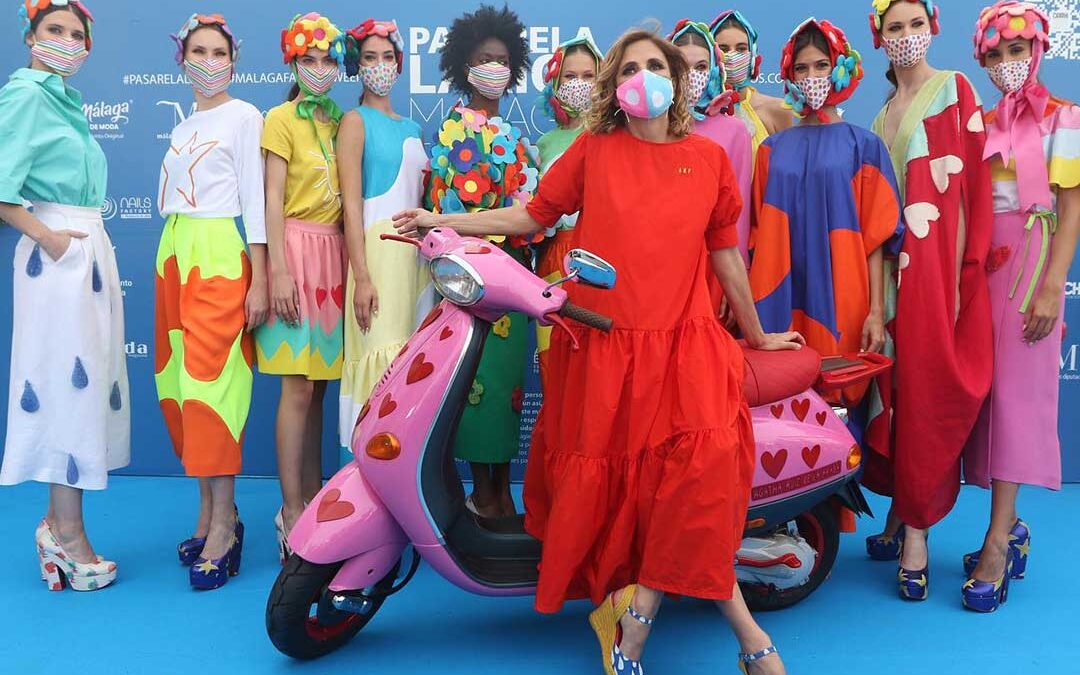 For those of you who follow us regularly, you already know that Francisco Alí Manén with his company Lord Drake Kustoms was the first motorcycle customizer to make a Harley for Ágatha Ruiz de la Prada. Such has been the success that we have repeated this year, this time with a colorful Vespa in the purest style of the famous fashion designer.

This Vespa has been presented at the Catwalk Larios “Malaga Fashion Week 2021” and has been the center of all eyes, both from the public and from the specialized press.

All pink and full of red hearts, this original Vespa for Ágatha Ruiz de la Prada has given style and color to this event in which there have been many personalities from the world of fashion.

This little Vespa was accompanied at the presentation by her older sister, the Harley “Agathizada” who gave so much to talk about in its day for its originality and for breaking all kinds of molds in the world of custom motorcycles.

Lord Drake Kustoms was invited yesterday (02/24/2020) to participate in the “Hoy en Día”, a morning show of Canal Sur TV, the regional television of Andalusia (Spain).

This morning news and entertainment program is presented by Fernando Díaz de la Guardia and Paula Sánchez where they review daily news and discuss current affairs with live connections anywhere in Andalusia.

Fran Manen presented on the set of “Hoy en Día” three of the most iconic motorcycles created in Lord Drake Kustoms: the “Envy” and “Urbantracker” which have won great international awards and the “Harley Agathizada” of which, surely they already know, since It has been one of the custom bikes most talked about this past year.

In addition, his son of only nine years, was invited to take the stage to show that he is willing to follow in the footsteps of his father.

Lord Drake Kustoms will participate in the AMD World Championship 2020

Lord Drake Kustoms will participate again this year in the AMD World Championship of Bike Buildings to be held from October 6 to 11, 2020.

This event, that will take place in Cologne (Germany), is one of the most important worldwide of custom motorcycle. In it, all the great builders and customizers come from all countries to participate.

In this same contest in 2018, Lord Drake Kustoms achieved the 2nd position in the Harley Modified category with the “Speedster” motorcycle, of which you have extensive reporting here.

This edition of 2020, has the following categories:

It is still a surprise the category (or categories) to which we present ourselves, but what is certain is that this year we want to surprise you.

We want in this edition to reach the top of the podium, so we are working tirelessly to create a custom motorcycle that exceeds all expectations. 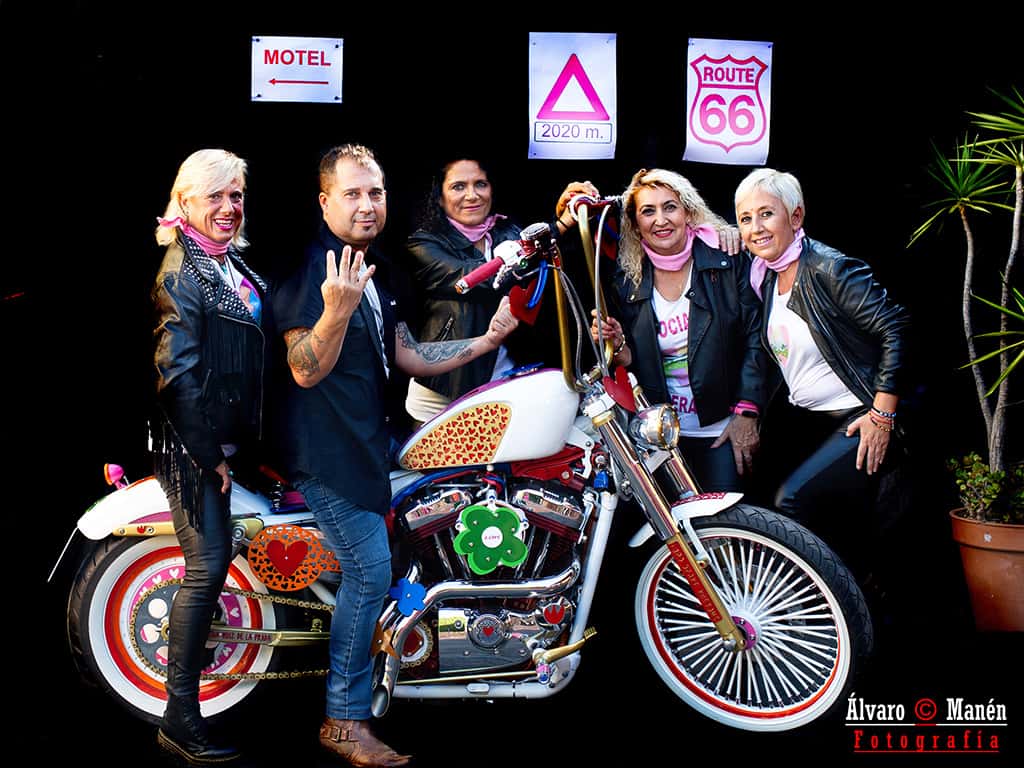 Lord Drake Kustoms has collaborated in the 2020 Solidarity Calendar of the “Asociación Esperanza” (hope association). It is an association of women against breast cancer in the region of Axarquía (Málaga).

The “Asociación Esperanza” does an important job in this community, helping all women who suffer from this disease, as well as their families, in a physical, psychological and social way. Through this type of support and with the services it offers, such as a physiotherapy service or its volunteer program, they get these people to obtain a better quality of life.

This calendar has been made by the photographer Álvaro Manén and it includes members of the association accompanied by Fran Manen and the Harley “Agathizada” (the first motorcycle Ágatha Ruiz de la Prada). It is not the first time that this custom motorcycle, unique in its category, has participated in an event against cancer. Last August it was presented by Fran Manen and Ágatha Ruiz de la Prada at a charity event in Marbella of the AECC (Spanish Association Against Cancer), surrounded by a multitude of personalities.

From here, we want to thank and congratulate Álvaro Manén for inviting us to collaborate on this important project, and the “Asociación Esperanza” for the great work they do every day in their fight against breast cancer. 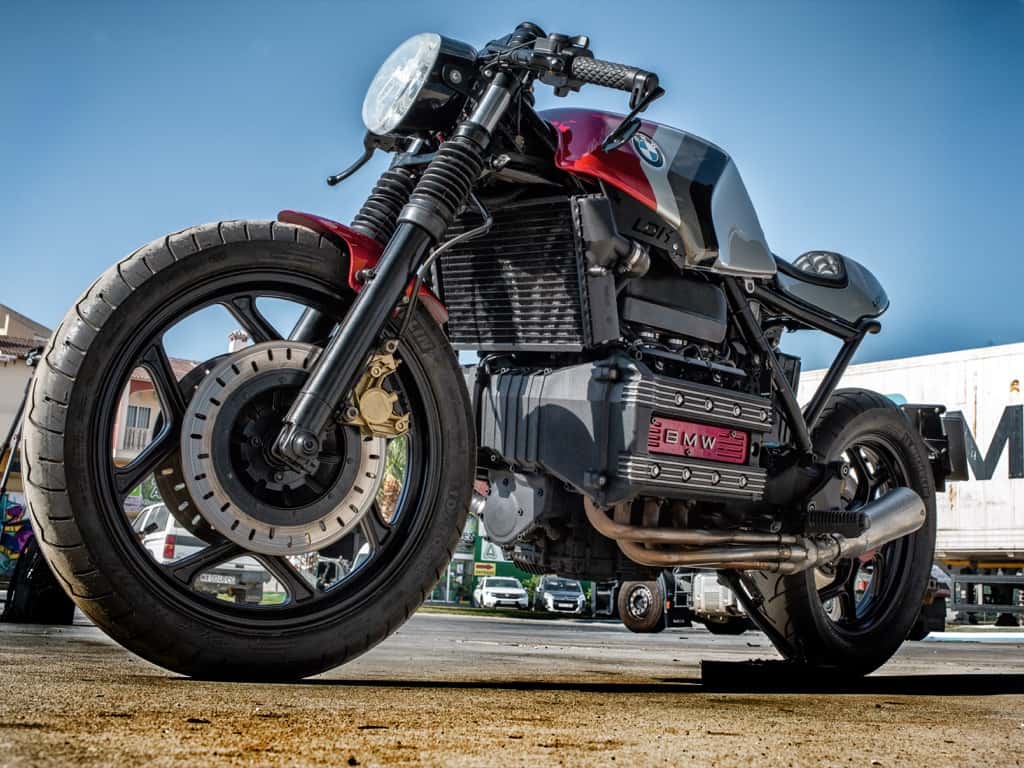 Perhaps, this BMW K100 it’s one of the least attractive models for Lord Drake Kustoms, when it comes to doing a work of customization; that is why it was a small challenge to make the final result aesthetically pleasing for both the client and the entire LDK team.

Currently the BMW K are one of the most demanded motorcycles to customize. Specifically, this model is a K100 from 1984 and arrived in excellent conditions at the mechanical and aesthetic level, so basically we didn’t have to worry much about updating the motorcycle mechanically, as is often the case with motorcycles of this type. He practically went into action and immediately began to disassemble it to see how something aesthetically beautiful and sporty and something Racing could be done.

Perhaps it’s one of the least attractive models for Lord Drake Kustoms, when it comes to doing a work of customization; that is why it was a small challenge to make the final result aesthetically pleasing

Once naked, the first thing that Fran Manen (owner of Lord Drake Kustoms) did was modify the front suspension to lower it and give it a more aggressive touch with the installation of semi-handlebars and an oval-type headlamp.

The entire rear part has been trimmed and modified to install a tailor-made tail, making the back part slightly raised. This position could be accentuated a little more thanks to the new air bottle damper, which is somewhat longer than the standard one.

The exhaust has become a 4: 1 with supertrapp tail, which has given it a very powerful sound.

Finally, the entire motorcycle was dismantled to paint the chassis, engine, tires and practically the rest of the pieces with black tones or a combination of red, gray and silver in the case of the tank and the rear tail.

All this was decorated with numerous details, among which stand out the flashers and led’s pilot, seat with hand-made upholstery, details on the rear wheel, speedometers and rev counter, license plate support, etc…

This BMW K100 RACER has been transformed into the workshop that Lord Drake Kustoms has in Malaga (Spain); and in a few days you can see it rolling through the streets of Marbella from its owner.

If you want something similar or looking to customize your motorcycle in any other style, do not hesitate to contact us. We remind you that we have facilities in Miami (USA) and Malaga (Spain).