Perhaps, this BMW K100 it’s one of the least attractive models for Lord Drake Kustoms, when it comes to doing a work of customization; that is why it was a small challenge to make the final result aesthetically pleasing for both the client and the entire LDK team.

Currently the BMW K are one of the most demanded motorcycles to customize. Specifically, this model is a K100 from 1984 and arrived in excellent conditions at the mechanical and aesthetic level, so basically we didn’t have to worry much about updating the motorcycle mechanically, as is often the case with motorcycles of this type. He practically went into action and immediately began to disassemble it to see how something aesthetically beautiful and sporty and something Racing could be done.

Perhaps it’s one of the least attractive models for Lord Drake Kustoms, when it comes to doing a work of customization; that is why it was a small challenge to make the final result aesthetically pleasing

Once naked, the first thing that Fran Manen (owner of Lord Drake Kustoms) did was modify the front suspension to lower it and give it a more aggressive touch with the installation of semi-handlebars and an oval-type headlamp.

The entire rear part has been trimmed and modified to install a tailor-made tail, making the back part slightly raised. This position could be accentuated a little more thanks to the new air bottle damper, which is somewhat longer than the standard one.

The exhaust has become a 4: 1 with supertrapp tail, which has given it a very powerful sound.

Finally, the entire motorcycle was dismantled to paint the chassis, engine, tires and practically the rest of the pieces with black tones or a combination of red, gray and silver in the case of the tank and the rear tail.

All this was decorated with numerous details, among which stand out the flashers and led’s pilot, seat with hand-made upholstery, details on the rear wheel, speedometers and rev counter, license plate support, etc…

This BMW K100 RACER has been transformed into the workshop that Lord Drake Kustoms has in Malaga (Spain); and in a few days you can see it rolling through the streets of Marbella from its owner.

If you want something similar or looking to customize your motorcycle in any other style, do not hesitate to contact us. We remind you that we have facilities in Miami (USA) and Malaga (Spain).

Lord Drake Kustoms will participate again this year in the AMD World Championship of Bike Buildings to be held from October 6 to 11, 2020.… 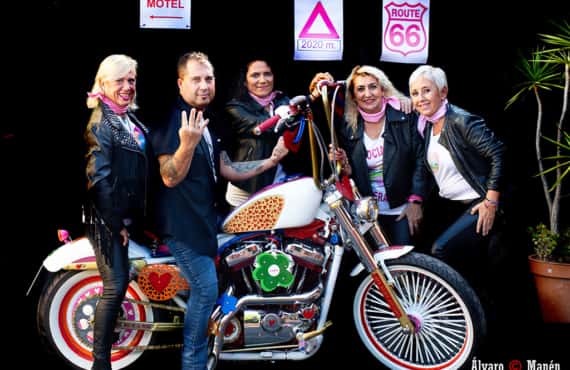 Lord Drake Kustoms has collaborated in the 2020 Solidarity Calendar of the “Asociación Esperanza” (hope association). It is an association of women against breast cancer…