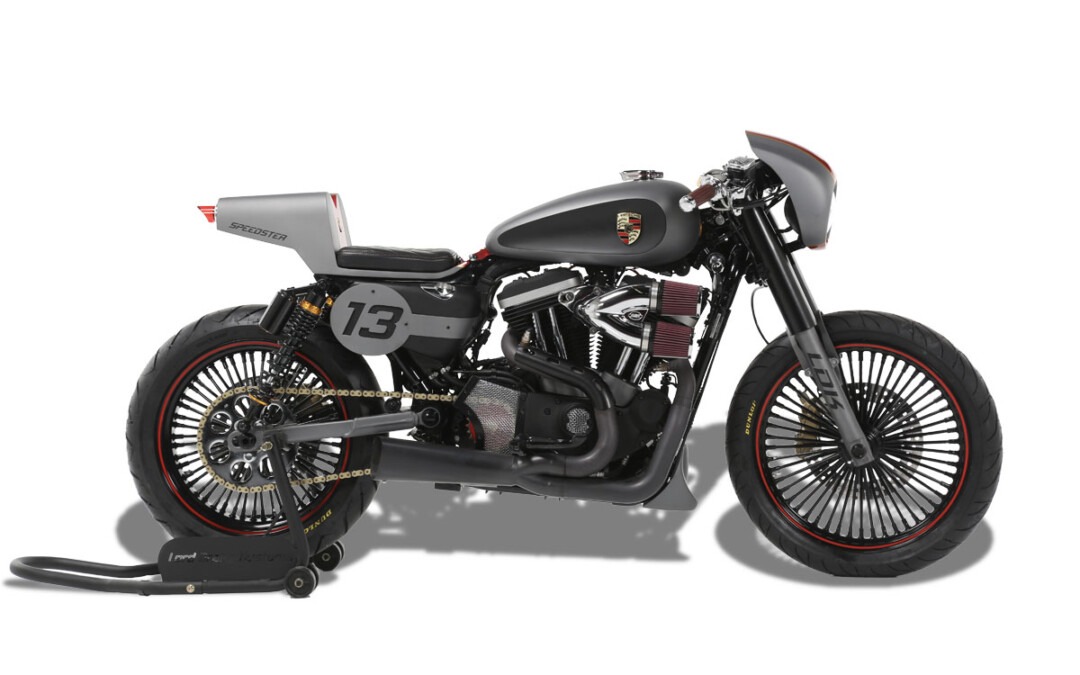 “Speedster”, is a Sportster Cafe Racer tribute to Porsche that has been runner-up in the world (modified Harley category) in the AMD World Championship of Custom Bike Building 2018. And thanks to it, the workshop motorcycle transformation of Lord Drake Kustoms it has positioned itself among the best Harley workshops in Malaga and the rest of Spain.

The words of Ferry Clot that inspired this Sportster Cafe Racer

Behind this motorcycle there is a story that the owner of LDK, Fran Manen, will never forget. Fran was preparing since 2018 a custom motorcycle to compete in the AMD World Championship held in October. In the month of July of that year, the Lord Drake Kustoms team assumed (much to their dismay) that it was impossible to finish the project on time and decided to cancel their assistance.

Suddenly, one day at the end of August, Fran Manen received a call from his friend Ferry that would change the course of this whole story.

Ferry Clot founder of Hot Dreams and pioneer of motorcycle transformation in Spain; He called to ask Fran if he was going to Germany at the World Custom Bike Show

in October. Ferry needed someone to take his motorcycle to compete and he could not attend because he was sick. Fran asked him what was wrong with him, and Ferry replied that he was fighting cancer.

The owner of LDK, stunned by this news, replied to Ferry that he would not attend the championship because he no longer had time to finish his project. Ferry’s response was: “NO, try to go anyway, you’ve been there once and you’ve seen how important it’s to be there. If you cannot finish that project you wanted, take one of the transformed Harley you have already finished, detail it, improve it what you can and go, even to make a presence”.

Fran went on to say that it was impossible, that he had already lost the illusion and that there was only a little more than a month left. So he didn’t want to think about the championship that year or its custom Harley. However, from that conversation, Fran did not stop thinking about the words of Ferry Clot.

Three days later, after much reflection and not sleeping, everything changed. Fran Manen arrived at his Harley customization workshop in Malaga, and informed his team that they were going to the championship. He would use a Harley Davidson Sportster Cafe Racer that they were building for a customer and that was about to end.

Fran called the client and asked if he could take the motorcycle to the Customization World Championship, although changes in colors, finishes and details should be made for this.

The motorcycle owner told him “Go ahead”. And there began a trip against the clock that, in less than a month, made Lord Drake Kustoms go from not attending the Championship to become the Runner-Up in the world of transformation of Harley.

The transformation process of the Harley Sportster 883

The idea was to turn this Sportster 883 Cafe Racer, almost finished, into a project that Fran had in his head for some time: a motorcycle tribute to the car brand Porsche (hence its name “Speedster” in honor of one of the mythical models of the German brand).

For this, the work of transformation of this motorcycle had to have a sporty, aggressive and elegant result. It has to be a Porsche motorcycle, it has to remind a 911 Carrera, a Speedster or a 917 model of the 24 hours of Le Mans.

A good job of painting and airbrushing on custom motorcycles like this one is absolutely necessary to obtain the great keys. And of course, details, many details, such as the Porsche emblems, the rear pilots, the craft tail, the wooden grips combined with chrome, sports gas cap and a very long list of exclusive components.

This Harley Davidson Sportster 883 R from 2007 converted to Cafe Racer and built in our motorcycle workshop in Malaga, was in 2nd place worldwide (modified Harley category) in the AMD World Championship of Custom Bike Building held in Germany in 2018.

From here, we want to thank and share part of this triumph with our friend Ferry Clot. Wherever he is, he is surely customizing something. Thanks Ferry!

You can order your own “Speedster” or Harley Cafe Racer now!

USED BASE IN THIS UNIT: Harley Davidson Sportster 883 (you can use any Sportster model)
STYLE: Cafe Racer

BASE: You can use any model of  Sportster.
TIME: 90 days aprox.
SHIPPING: Worldwide. Free shipping to USA & EUROPE.