In recent years there has been an upward trend in the choice of the famous BMW brand as the basis for motorcycle customization. In this article we will explain why they are ideal to build (or build you) your own BMW Cafe Racer or Scrambler.

A history note of BMW motorcycles

The mythical German brand began its journey with the manufacture of motorcycles back in the 20s. This barbarian company began manufacturing aircraft engines, which can still be seen in its logo that symbolizes blades over the blue sky.

It was precisely this aeronautical engineering applied to the engine that led them to include it in their first motorcycle in 1923. It was the BMW R32 that mounted the engine on a double-tube chassis and transmitted the power to the wheel through an articulated propulsion or cardan joint.

This structure is the basis of the motorcycle models that BMW manufactures today.

And what makes BMW so special?

For starters, it is a brand associated with security. Everyone knows that, whether we talk about their four-wheelers or two-wheelers, everyone agrees that this firm has managed to combine the robustness of its designs and elegance in its finishes, creating a deserved reputation for vehicles High-end very safe.

But focusing on the field of motorcycles, another factor that is usually taken into account is the high availability of parts to combine and be able to assemble your own custom motorcycle. Unlike other brands that can be an extra effort to find pieces that fit well.

The latter are important characteristics, but perhaps the one that has more weight is the characteristic retro style that these motorcycles have taken over time. Especially those created in the 70s, 80s and 90s.

Best models to have a BMW Cafe Racer

As we have said before, vintage models are preferred for modifications. BMW has several lines of models defined by letters. But the R and K models are the most ideal for our purpose.

The R models were designed to create motorcycles that serve both field and road. Japanese companies were squeezing hard in this segment in the late 60s, which is why BMW reacted by creating the R50/5, R60/5 and R70/5 series. These models already incorporated the mythical two-cylinder boxer engine.

During the 70s and 80s, these bikes were preferred for adventure trips. In fact they were the most viewed in the Paris-Dakar editions. In its advertising of that time, slogans such as:

“A motorcycle transports us to new dimensions, the world wins in colors and becomes wider. A motorcycle must be lived. As long as there are men who appreciate intense contact with the most sophisticated technology, there will be motorcycles. Motorcycles as BMW builds them ”

These models meant a lower weight for the motorcycle and greater agility. All this without losing power (up to 50CV in the R70/5 model) with a large tank and low consumption.

Lord Drake Kustoms has worked on these models, obtaining splendid results in all of them.

These are some of our creations with BMW R:

These models were highly appreciated for their powerful engines and groundbreaking design. They were a great revolution thanks to its four-cylinder in-line water-cooled engines.

Although, really what BMW did with these models was to incorporate all the leading technologies that the Munich brand was developing.

These improvements were, for example, the ABS anti-lock braking system, the first electronic speed control for motorcycles, the electronic suspension adjustment (ESA) or the heated seat.

BMW motorcycles, with almost a century of existence, remain a safe value for their comfort, power and safety.

That is why, you choose the one you choose, to carry out your customization, they will be the perfect base for a custom Cafe Racer or Scrambler dream motorcycle.

In our motorcycle customization workshops in Malaga and Miami, we can make your dream come true.

And you, have you chosen which one will be yours? 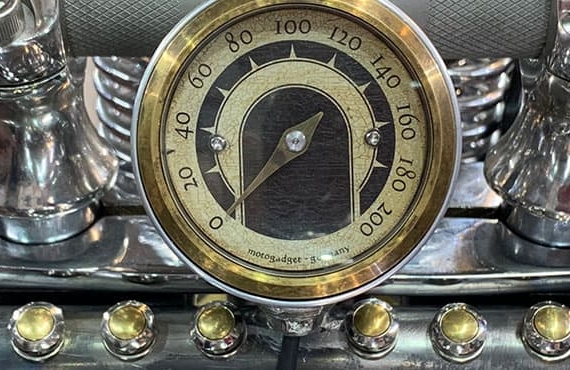